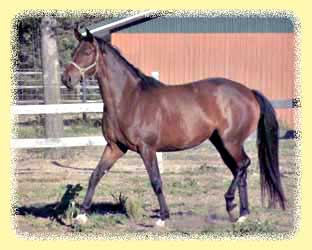 TARIANA is a bay mare with the best of her parents' qualities. An elegant mare with phenomenal movement, she is intelligent with an excellent mind, and has been shown lightly in jumping and dressage in between foals.

An excellent mother, Tariana has produced four outstanding fillies for us: Tanzelfe, by Kaspareit, in 1999; Tanzdiva, by the Hailo son, Impressionist, in 2000; Tanzfee by Kaspareit in 2001; and Tanzbrise by Windfall *Pg* in 2004.

On July 28, 2006, Tariana broke her streak and produced her first colt, Tanguy, a dapper little son of the imported Verband-approved stallion, Guy Laroche. Tanguy was purchased in utero by Heidi Lightle.

On November 27, 2009, Tariana joined the broodmare band at Four Leaf Farm in Sterling, Illinois. Congratulations to Joie Roddy and our best wishes to her in her breeding program! 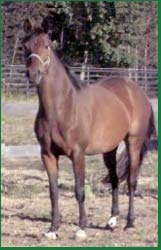