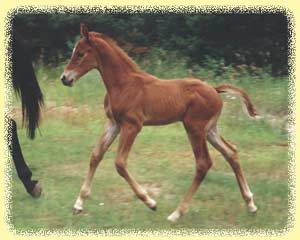 We who choose to surround ourselves with lives
even more temporary than our own,
live within a fragile circle, easily and often breached.
Unable to accept its awful gaps,
we still would live no other way.
We cherish memory as the only certain immortality,
never fully understanding the necessary plan.


ITARZAN was a handsome young man with fantastic jumping aptitude. In November of 2000 he was purchased by Virginia Slavin and moved to Texas, with aspirations for Grand Prix jumping. Virginia had this to say about her little boy when she saw him "in person" for the first time, after his arrival in Texas:

I am extremely happy with Tazzy. He handled the transport fine, there were no ill effects from the long trip, and the drivers were very complimentary on his loading and unloading manners. He ate and drank well when he got here, we didn't have any problems switching him over to the new routine. Most importantly, his personality was exactly as Ingrid had described. He is healthy, happy, and well adjusted. It's interesting to me, being around a lot of horses that were treated roughly in their early years, the contrast between Tazzy and those other horses. You can tell that the thought of people wanting to hurt him just has never crossed his mind. I think this speaks a lot for the way he was raised.

At three Tazzy was easily started under saddle, now quite tall but still the sweet tousled little boy he always was. In October of 2002, Taz and Virginia were preparing for his first show when tragedy struck. Tazzy colicked and was rushed to a clinic with what proved to be an inoperable intestinal strangulation. He is missed by all who knew him. 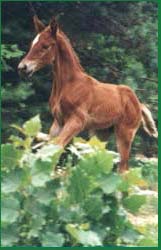