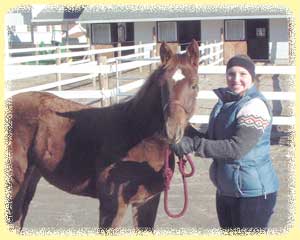 Noble, outgoing, friendly and vivacious, TOUJOURS FÉLICITÉ ("Happiness Always") is tall and substantial with a beautiful topline. She has an amazing back, strong and broad in the loin connection, and powerful hindquarters. Her sire's influence is apparent in her head and neck, and very much so in her movement which is huge, elastic, and animated with expressive articulation of the joints. Felicia is athletic and a balanced mover, with clean flying changes right from the start.

She is an outstanding filly from the first North American foal crop of the Verband Premium stallion, Guy Laroche, son of the great Michelangelo and proven in Germany as an outstanding sire and movement-improver. Guy's present owner, Connie Kempter, calls him "Mr. Nice Guy," because he has such a good character. In fact, he received excellent marks at his 100 day test for his temperament, character, and rideability. His babies are noted by the German Stallion Book as being easily recognized from their nobility, conformation, and presence.

Felicia is the first foal of her dam and represents the fourth generation of our program, great-granddaughter of our foundation mare, Tara. Tanzelfe is virtually a clone of her sire, the German Trakehner Verband approved FEI stallion, Kaspareit. Kaspareit—as well as Elfi—was strongly stamped by his sire-lines of Ibikus and Impuls and his tail-female line to Kassette. These bloodlines are renowned for producing riding horses in all disciplines, equally at home in the dressage arena and on the stadium course. Elfi is a champion in hand and was the site champion at her ATA inspection in 2003.

Felicia is everything we were hoping for from this cross—strong, supple, and very athletic.

The baby is doing great, everyone loves her, we're calling her Felicia, because "Felicia" means "happy" and I think she is just a happy little thing. She's settled in perfectly, she loves her pasture buddy, and she's wearing a blanket, she's got her nose clipped and her ears clipped so she's all spiffied up. So anyway, I'm loving her....

Felicia had a great start to her show career, on the line, in 2005. She finished the year with a median score of 76.300% as USDF HOY, ranked first in the ATA USDF All-Breeds for Yearling Fillies, and ranked 17th nationally for USDF Yearling Fillies!

Felicia showed again in 2006, finishing the USDF HOY requirements with a median score of 73.500%. Watch for her in 2007, competing in the USDF HOY program and the ATA 3 Year Old Futurity!

Congratulations to Rochelle and Felicia and best of luck to them on their dressage future! 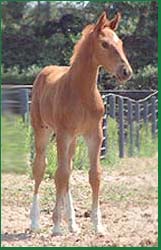