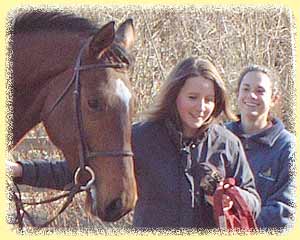 ITAMIGA is a beautiful mare of significant proportions with huge movement and natural jumping ability.

In December of 2000 she was purchased by Linda and Stephanie Grandbois. Maggie traveled through the worst of winter storms to arrive in Massachusetts in time for Christmas. Shortly after the Grandbois family met Maggie, Linda wrote:

She enjoyed herself yesterday making new friends. Steph said she would try to nap, close her eyes outside and then one of her new buds would move around her and wake her. I should tell you that she brings a great deal of interest and everyone thinks she is just beautiful. Maggie's show name is "Stephanie's Story"—I think we will have a grand story to tell ....

Maggie is Stephanie's first horse and she has done almost all of her training on her own. As a four year old, Maggie is working well under saddle. Steph showed Maggie at her ATA inspections in August 2004 and Maggie scored a total of 50 (7,7,7,7/8/7,7)!

We had the opportunity to visit the Grandbois family and Maggie in December of 2004, and it was really a treat to get to see Maggie for the first time in four years. She has matured even better than we anticipated in all respects. Maggie is the largest horse we have bred, standing a true 17 hands with another inch or two to come. She has perfectly straight legs, great movement, and the even temperament which we have seen to be typical of her breeding.

Good luck to Stephanie and Maggie in all of their future endeavors! 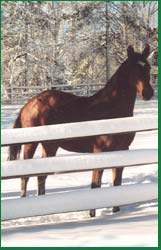