ITAMIGNON is a medium bay mare with a star. She is an athletic horse with the easygoing disposition you would expect from Pregelstrand breeding. "Lottie" has done it all, and done it well, showing on the line, in English Pleasure, Hunter Under Saddle, Hunter Over Fences, and Western Pleasure. In 1997, under a 13 year-old rider, she captured three Reserve Hi-Point Championships from the Midwest Trakehner Association for Broodmare In Hand, Hunter Under Saddle, and Miscellaneous Performance.

Lottie produced an excellent colt for us by the imported stallion Kaspareit, Itarzan, in 1999 and a lovely bay filly by Kaspareit, Itamiga, in 2000. Completing the "hat trick," on May 26, 2002, Lottie delivered a third Kaspareit foal, another filly (this one chestnut), Itanika! Lottie's last foal was the gorgeous filly, Itasophia, by the Pan-Am Gold and Olympic Bronze eventing stallion, Windfall *Pg*. All of Lottie's children inherit her sweet nature and a love of jumping.

On August 10, 2007 Lottie delivered a palomino colt by the Jockey Club stallion Guaranteed Gold xx. Itastaire ("Freddy") is a beautiful boy who seems to have his mama's disposition.

Other Mares at Tannenwald Trakehner: 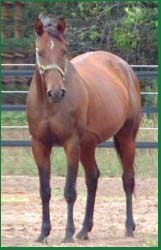