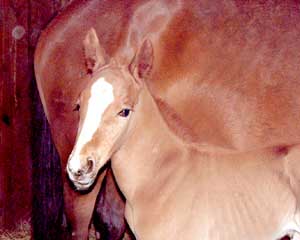 When you are sorrowful look again in your heart,
and you shall see that in truth you are weeping
for that which has been your delight


TRAVERSE RED (aka "Tobey") arrived in the early hours of May 19, bright, strong, and possessing amazing stamina. Leggy and elegant, Tobey reminded us very much of his dam Tarika as a foal.

The epitome of "Trakehner Tough," Tobey overcame one challenge after another, beginning before he was born. When she was five months pregnant with Tobey, his mother suffered a severe colic after receiving her Pneumabort shot, a standard vaccination for pregnant mares. Throughout his mother's colic surgery at Michigan State University, a week-long hospital stay, the long trip home, her return to Michigan State for another week after developing post-surgical peritonitis, and her subsequent recovery over the next two months of antibiotic therapy, the little foal-to-be remained healthy with good vitals as monitored by frequent ultrasounds.

The end of her pregnancy was uneventful and, with the spring weather being agreeable, Tobey's dam gave birth outdoors. Unfortunately, she foaled at the edge of her paddock and the infant Tobey found his legs and took his first steps separated from his mother by a fence. He was active and quite intent on finding some milk by the time his humans were able to assist him in rejoining his mother.

At three days old, Tobey faced his next challenge when his mom colicked again. Our vet gave the mare a dim prognosis, and I have always been convinced that it was little Tobey, with his insistant prodding, that motivated his mother's fight to survive.

Vivacious and inquisitive, Tobey had great interest in the world around him. After weaning he was turned out with the other foals from that year, and played "Wild Kingdom" stallion games with his buddy, Tango. His conformation was excellent, with a medium length back, absolutely straight legs with strong short cannons, a well-set neck, and a laid back shoulder. His movement was really spectacular, with great freedom in the shoulder and a very active hind end.

Tobey's pedigree combined some of the best performance bloodlines in the Trakehner breed. His sire, Sonset's Sieger, himself a proven competitor in eventing and jumping, is by show-jumping's Trakehner superstar, Abdullah, and out of a mare by the great Habicht. Tobey's dam carries the blood of the foundation stallions Ibikus and Impuls through her sire, Kaspareit, as well as Mozart, Avignon II, and Prince Condé.

A beautiful colt, with a solid genetic foundation proven in dressage, jumping, and eventing, Tobey was maturing into a promising stallion candidate. We had already begun making plans for him to go to a facility where he could begin preparation for inspection.

Unfortunately, adversity struck again, this time in the form of a strange swelling on Tobey's cheek below his eye. Assuming an erupting tooth might be causing the problem, we gave him a course of antibiotics which provided some improvement. When his breathing became affected we suspected there might be something else going on, and took him down to Michigan State for better diagnostics. After an endoscopic exam and radiographs, he was diagnosed as having a massive tumor of bone or dental origin in his sinus. The condition is rare—rare enough that one of the radiologists consulted had seen such a case only on his licensing boards—and, unfortunately, not operable with any expectation of success. Over time, the growth would further compromise his airway until he would be unable to breathe. Tobey was euthanized on November 5, 2008.

Horses for Sale at Tannenwald Trakehner: 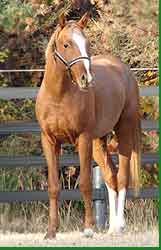