Princess was bred by the Barton family of Sorento, Illinois and has been a valued member of the broodmare herd of Castell Imperator Hof.

Flaneur was Reserve Champion of the 1967 Körung at Neumünster, and was approved with the comments:

"Exemplary model with much significance in the whole appearance. Typey head; good neck; well-positioned, broad, and well-muscled shoulder; good and uniformily conditioned body. Strong and correct in the foundation with good, straight movement. The stallion has proven himself to be a predictable, above-average sire."

Performance tested at Westercelle 1968, Flaneur was highly scored and described as follows:

He was a successful eventer and spent most of his life in the care of Ilka-Ilona Wenzel. His impact on the Trakehner breed is great, having sired 15 graded stallions in Germany (the most important generally considered to be AROGNO) and 106 Stud Book daughters, including the States Premium Mare MAHARANI II (dam of Elite Stallion MACKENSEN and full brothers MAHAGONI and MARLON), States Premium Mare PERIHEL, and Elite Mares KANCONETTE and KARAWANE II (dam of the approved stallion KANTOR, States Premium and Premium Mare KANDICE, and Elite Mare KARAVELLE III). His descendents are sought after for competition, and his son TROUBADOUR was Christine Stückelberger's reserve mount for the Seoul Olympics. Flaneur died in 1988. 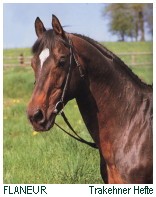 Truly a super-mare, as well as Verband Elite mare, Arcticonius gave birth to three graded stallions--full brothers AVIGNON II and Elite Stallion AROGNO (also Reserve Champion at Körung and winner of his performance testing) by FLANEUR, and ACAJOU by the Flaneur son DAMASKUS, as well as daughters including the States Premium and Premium Mare ANNA KARENINA (dam of the stallion AMATCHO), and ARKTIS II (dam of the stallion ARENTINO), both daughters by FLANEUR. Arcticonius xx died in 1992. 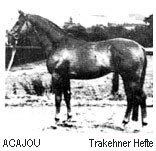 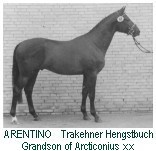 Reserve champion at the Neumünster approvals in 1973 with the comments "A breeding stallion of significant format with good pronounced musculature and a strong foundation; the strong, broad hocks stand a bit close, the hind pasterns a bit out; significant mechanics in all gaits."

He was imported to the U.S. by the Barton family of Sorento, Illinois in 1980 and stood at their Castell Imperator Hof until his death in 1983. In his relatively short breeding career he sired 20 stud book daughters in Germany, and three stallion sons in the US: TAUSENDSASSA and TAUROGGEN out of TARABIA "E", both approved by the ATA and since gelded, and DANZIG, previously approved by the NATA and now ATA licensed, currently standing at stud. Ricardo is also the dam's sire of the imported MAHAGONI son, BÜTOW, out of BARINA.

Trakehner mare owned by the Barton family. Ta Condé is the dam of the 1996 National Champion Mare THE NOIR VOM CASTELL by AVIGNON II.

Maharadscha won Second Prize at the 1962 DLG Exhibition in Munich. He was of vast importance to the Trakehner breed in the post-World War II period, as a grandson of the extremely significant Arabian stallion Fetysz ox. Maharadscha sired 11 graded sons and 82 stud book mares, including German Elite mare ABIZA (dam of ABDULLAH). He improved the herds of his own stud as well as the State Studs at Birkhausen and Rantzau, in addition to Gestüt Schwaighof. The German Stallion Book lists the following comments:

"Extraordinarily beautiful, expressive stallion with Arabian stamp, but in a large format. Very pretty face, much neck, thoroughly sufficient girth; the way of going is elastic and swinging; the stallion shows the best inclination for riding. In his youth he had such a bad accident that his recovery was doubtful. From that he retained a somewhat crooked head carriage which was only noticeable in the stable. From a veterinary perspective, this probably resulted from a hearing impairment from the accident.

A stallion of vast significance not only in the Trakehner but also in Bavarian breeding. Although somewhat nervous and therefore a hard keeper, he did not pass that on. His children inherited a pleasant character, good rideability, and good rhythmic movement. His sons, Flaneur in the Trakehner and his full brother, Mahdi, in the Bavarian breed, took a paramount position."

"Compact, well-sprung ribs and very muscular stallion with a pretty, small head. The front feet could be tighter. Very agile and always balanced in all movements. Surprisingly he produced large-framed horses, amongst then breeding stallions with quality and much movement."

Index sired 5 graded stallions and 54 studbook mares before his death in 1989.

Prince Condé was Reserve Champion of his approvals at Neumünster and Champion at the DLG Exhibition at Hannover 1972. He was performance tested at Westercelle 1970 and was Reserve Champion, with the following results: "Walk good, trot and canter very good; sensitive temperament; hard constitution; good rideability, needs a sensitive hand; good jumping ability; intelligent riding horse with versatility."

The German Stallion Book provides: "The highest measure of nobility and beauty; complete harmony in everything. Smooth musculature; dry and clear texture; lovely in neck and head; wonderful in his manner and way he presents himself. Ideal movement for a riding horse in all paces. Girth's depth and breadth above average; the cannons could be somewhat heavier."

He sired 4 approved sons, including ZAUBERKLANG (Reserve Champion of his performance test, DLG Champion, and winner of 5 championship titles at Devon), as well as 37 studbook mares.

The German Stallion Book has these comments: "Stallion of beautiful lines with Arabian sparkle; expressive face; good neck; much shoulder and withers; somewhat straight loin and pelvis; medium-weight, very dry foundation; good, straight way of going. He delivered a row of first-class mares, usually of medium size with much harmony and easy keepers. The geldings by Famulus often reach oversize. His get are later usually joyful and energetic with suitability for dressage and jumping."

A son of the Arabian stallion FETYSZ ox, Famulus sired 3 approved stallions and 31 stud book mares before his death in 1958.

Marke is by the stallion MARKTVOGT out of J. FELDROSE by HEXENSCHUSS (a son of DAMPFROSS, he was bred at the Main Stud Trakehnen in East Prussia).

Sired by GIGANT and out of ERBIN by HANNO. The German Stallion Book provides the following comments: "A good breeding stallion with four strong, correct legs and massive torso. Swinging movement, front right somewhat wide in the knee. Almost always passes on his good foundation, width and depth in the body and his get very often have expressive heads with a wide forehead." Gabriel was sold to Denmark in 1963. He sired 4 approved stallions and 34 stud book mares before his death in 1965.

Flora is sired by the Thoroughbred stallion GO-GO xx and out of FLAMME by TAUENTZIEN.

Archive xx is sired by the Thoroughbred stallion NEARCO xx (by PHAROS xx) and out of BOOK LAW xx by BUCHAN xx. 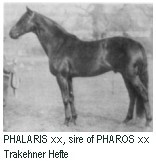 Preen xx is sired by the Thoroughbred stallion PRETORIUS xx (by SON IN LAW xx) and out of FLAMME xx by TAUENTZIEN xx.

Hill Gail was sired by BULL LEA xx (sire of numerous racing champions, including the 1948 Triple Crown winner CITATION xx). Hill Gail lived up to his family's heritage, winning the 1951 Kentucky Derby under Eddie Arcaro. He had earnings of $335,625 prior to retirement. Hill Gail was exported to Ireland where he was used in sport horse breeding.

ARCTIC PATH xx is sired by the Thoroughbred stallion ARCTIC STAR xx (by NEARCO xx) and out of MERRY PATH xx by BALLYOGAN xx.

Sired by TROPENWALD, the most important Trakehnen-born sire to reach the West, and out of PERAEA (HIRTENSANG-FETYSZ ox). Photographed in 1962 at the age of 4 years. Pregel was performance tested at Westercelle 1961 with the following comments: "Walk and trot good; canter very good; temperament: even-tempered, very good; good constitution; rideability and jumping ability very good; reliable, good riding horse."

He began his stud career at Hunnesrück and stood there until 1965, after which he stood as chief sire at Marbach for 13 years. During the pivotal period following World War II, Pregel sired 11 graded stallions in Germany, including DONAUWIND (sire of ABDULLAH and 15 other graded stallions) and 81 Stud Book daughters, including the Premium Mare VERBUM. The German Stallion Book provides the following comments:

"Medium-sized, deep, broad stallion with much character and a calm temperament. Expressive head; medium-length, well-set neck; sloping croup; well-formed but somewhat closely placed, angled hocks; the foreleg is well-muscled in the forearm with short, sturdy cannons; the movement is in walk, trot, and canter paramount. One of the important breeding stallions of the modern age; equally good in siring breeding stallions, brood mares, and riding horses for all disciplines. He marks his get with quiet and calm behavior in every case, and excellent movement with strong impulsion from hindquarters. Good character."

Sired by the Thoroughbred stallion MAIGRAF xx and out of ISOLA LONGA by TYRANN.

Sired by STERN xx and out of ISLAND by HANSAKAPITÄN. The German Stallion Book provides as follows: "Noble stallion of large lines with good expression; well-set, long neck; shapely body with moderately sloped, well-muscled croup; the legs are correct and sufficiently strong; the hocks could be somewhat drier; very good walk and excellent trot. In two years at stud at Rantzau, he sired 9 daughters and 3 graded sons, and proved himself very well. The get have sufficient lines and good frames, are completely uncomplicated in character and very comfortable in their entire being."

Isländer sired 4 graded sons and 10 studbook daughters in Germany before being sold to Denmark in 1964.

Sired by LAUSBUB and out of RENI 469. Regina is the dam of Verband Premium mare RASTENBURG and ROSITTEN by STERNDEUTER.

A French Thoroughbred, in 38 starts, Prince Rouge won 4 races and placed in 14. He was on loan to Gestüt Birkhausen from 1965 to 1973, then stood with W. Lühr in Westfalia until 1975. The German Stallion Book lists the following comments:

Prince Rouge xx was a prolific producer, siring 5 approved sons and 48 stud book daughters, earning the record for Trakehner studbook mares by a Thoroughbred stallion. He was favored for breeding and his bloodlines are still sought-after due to the innate jumping ability his get possessed. Prince Rouge xx died in 1976.

Hartung was performance tested at Westercelle 1965 with the comments "Good temperament; good appetite and easy keeper; some stiffness in the neck and hindquarters; good ground-covering walk, trot, and canter; the stallion scored very highly in the final test."

German Stallion Book comments: "Massive frame standing with good expression, much neck; correct, strong legs; very swinging trot. The stallion had a large influence in breeding in the Rhineland. Especially notable are the large number of very good daughter with the best physique and strong foundations." 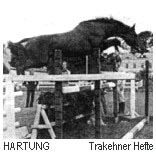 Trakehner mare by MAIGRAF xx out of TANOA 1342 by PERSERFÜRST, out of TAPETE 694 by PYTHAGORAS.